News Spread – Rice sacks were moisturized intentionally by spraying water on it and the sacks are sold for Rs.1 per kg to the alcohol plants claiming that the rice sacks were damp. 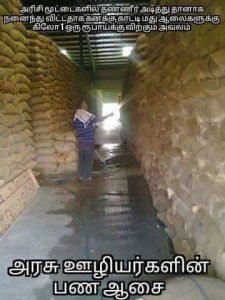 Summary – A news with the same picture was published in the year 2016 stating that the wheat sacks in the warehouse of Indian Food Corporation are watered to kill insects in the grains.

Description – A picture of a person watering rice sacks in government warehouse went viral in social media platforms. It is said that such moisturized rice sacks were sold to alcohol plants for Rs.1 per kg.

A news article said that this incident happened in a warehouse in the village of Gurudia, Orissa. Let us see the reasons for moisturizing the sacks.

Government Grain Warehouse – This particular warehouse of Indian Food Corporation is situated in Gurudia, Orissa. It is stated that the warehouse employee watered the sacks to protect grains from insects. But this happened right before sending the sacks out of the warehouse.

A news of spraying water on wheat sacks in the warehouse of Indian Food Corporation was published in the year 2016.

Conclusion – There were also posts stating that the incident occurred in Tamil Nadu. It is clear that the sacks are of wheat and not of rice, and it happened in a warehouse in the state of Orissa and not in Tamil Nadu.

There is no evidence to prove that the rice sacks are moisturized intentionally so that they can be sold to alcohol plants. But there are several such news on grain smuggling, spraying water on grains in the storage to increase weight and so on.

If the stored grains are well maintained and distributed legally/properly, we can reduce food shortages in our country.

The fact that wheat is sprayed with water

Spraying of water in the FCI warehouse to save wheat from insects. 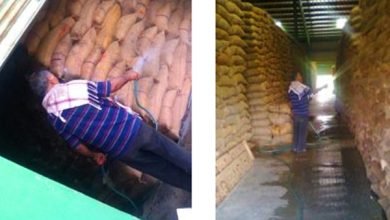